You are here: Home / Fishers of Men / Adventures in Chiapas

walking down to the river

I went on another Crusade!  As many of you know, I went on a medical crusade with Fishers of Men last month (they’re a monthly occurrence).  I thoroughly enjoyed it, and last week I had the chance to embark on another.  If you’d like to learn more about what these “Crusades” are and what we do, you can check out my overview here.

This Crusade was a bit further than the four-hour trip to get to the second.  It took roughly 18 hours each way!  One of our furthest destinations to be sure.  This Crusade took place in two small villages in the mountains of the southern state of Chiapas, bordering Guatemala.

We left at about 5:30 in the morning on Friday the 12th, spending that entire day driving to a larger town near the villages we would be serving to spend the night at a church there.  The drive was long, and every seat of our 15-passenger van and two pickup trucks were taken, but it was fun nonetheless.  We all slept a lot (getting up at 4 tends to have that effect), ate snacks, played games, and watched the beautiful scenery go by out our widows.

Saturday was our first day of work, so we got up early for the hour drive from the town to the first village, where we set up and began a good day’s work.  I worked in the dentistry area the same as last time, but instead of just cleaning dentists’ instruments, I was preparing and delivering them to the dentists as they worked as well.  I’m pretty sure a quarter of all the Spanish nouns I know are dentistry related!  Thankfully, my fellow assistants Diego and Mildred both spoke fluent (Diego) or a little (Mildred) English, so combined with my Spanish abilities, we made a good team.  At both of the villages, we needed translators…because some of the citizens didn’t speak Spanish!  There were two native dialects in that area.  They were intriguing to listen to and contained many “shk” and “ch” sounds.

Saturday night included a church service since we would be working that next Sunday.  We like to avoid that on Crusades, but with the distance as long as it was, it’s just unavoidable sometimes.  Meals for the week mainly consisted of beans, rice, eggs, and chicken soup with unknown vegetables.  And tortillas.  Always tortillas.  This region also makes some amazing habañero salsa that I put on almost every meal, although only two or three drops at a time.  That stuff was spicy!

Sunday and Monday were fairly normal days of work.  I got some good reading in during the mornings before there were patients at Dentistry, finishing the first two books in the Chronicles of Narnia.  As with any trip, I made better friends with my fellow youth as the days went on.  Mildred would occasionally give me the list to call new patients, although only when their name included an r that I would have to roll.  She and Diego found it hilarious that I can’t yet roll my r‘s.

Around 4 on Monday, we finished up at the first village, then packed up and drove ten or so minutes to the second.  We were treated to a great lunch (yes, we had lunch around 6), then walked down to a beautiful little river near town.  I started out skipping rocks, but the other youth soon convinced me to swim. It was amazing and reminded me of my times hanging out at the creek behind my house as a kid.  I did manage to get a nice little cut on my heel though, which I can still feel over a week later as I write this.  I need to buy some sandals…

Tuesday was another good day of work at the second village.  We were set up in a school complex this time, and in the dentistry area, we found a chart containing the words and symbols for the native dialect’s numbers along with our Latin ones.  It was really interesting, and actually a system I remember learning about in Social Studies in sixth grade!  If I remember correctly, the Aztecs used a similar system.

Wednesday was our final day of work, so we worked hard to finish seeing all the patients we had.  At breakfast, Coronel Eskemilla (a senior member of our Crusade staff and retired military Coronel), showed me how to be a proper Mexican in spite of my lack of language fluency.  First, he sucked on the outside of a lime slice.  The healthiest part, he said.  Then…he had me take a bite of what I think was a jalapeño.  Not an American jalapeño, mind you.  There was nothing waxy about this one, it was all juice.  I think that was the only time food has brought me to tears.

Dinner that day was one of my favorite meals that week.  We had some amazing pork (in a broth like everything else) that had been a little piggie about nine hours earlier, and man, was that amazing!  The entire team was thrilled to have it.

THE CURSE OF THE AMERICAN STOMACH 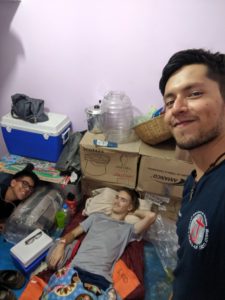 My friends kept me company during my, uh, eventful evening. If you look close, you can see the IV sticking out of my right arm.

Unfortunately, my American stomach got tired of me pretending to be a Mexican.  About an hour later, that amazing pork came right back out…and kept coming out until Coronel Eskemilla gave me an IV at midnight.  I don’t think I’ve ever had such an intense and sudden sickness before, but I’m thankful it happened when I was surrounded by about 25 doctors and medical students.  After the IV, I did much better, although those things hurt like crazy going in!  I’m already not too fond of needles, and that was a rather large needle.

During my little episode of bodily protest, the rest of the team was packing up and driving back to the larger town to stay the night.  I mean I drove too, of course, they didn’t leave me in a town where no-one speaks my language.  Thursday was another early and long day of driving, although it was much more pleasant than I was dreading thanks to my IV and an army of doctors forbidding me from eating anything that would upset my stomach…even pizza!  Everyone else got nice, hot pizza and I got to sit right next to them and watch.  Entirely unfair if I do say so myself.

Well there you have it, the adventures of an American white kid in the southern mountains of Mexico, pretending to be a Mexican and not quite succeeding.  It was a week full of adventure and fun, new experiences and new words.  As happy as my stomach was to return to Rosa’s cooking back at the Ranch, I’d still go all over again.  This is what I was made for.  Going and serving where few others bother to go, surrounded by people who don’t take Jesus’ words lightly when He told us to love the poor.  If you’ve got any medical skills and ever feel called to serve somewhere new, I think I’ve got a place for you.