You are here: Home / Fishers of Men / How to Have a Prodigal Child

Today’s post is from Julie Claassen, founder of Fishers of Men and my “Mexico Mom” while I’m living here for the summer.  This article discusses the events that occurred a few weeks ago and the lessons she’s learned from them.  If you’d like to hear more from her, check her out at our Facebook page. 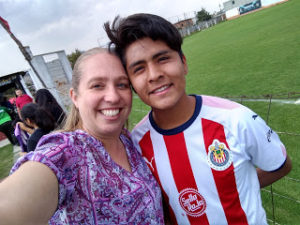 Leo and I at one of his games

A few weeks ago, I faced a parenting situation that required wisdom, insight and determination, like most all situations that we face as fathers and mothers! Two of my teenage boys, Leo, age 17, and Miguel, age 15, also biological siblings, had made some unwise decisions while at a national soccer tournament with their team. As occurs on many occasions, a bad decision is rarely an isolated decision, but actually just one more bad decision in a rather long line of bad decisions. There comes a time, along that line of bad decisions, where decisive action must be taken. That time had arrived.

As a result of the most recent bad decision, I made the determination to pull them out of soccer, explaining that the development of their integrity and character carried much more weight and importance than the development of their soccer skills. In fact, the decisions they had been making had the potential to completely ruin their hopes and dreams of moving up in the soccer world, so to protect those dreams and ambitions, this lesson needed to be learned NOW.

Not surprisingly, their perspective of the situation and my perspective did not match. In reaction to my decision to make them step back from soccer for a time, Leo and Miguel decided to return to their biological mother.

Leo and Miguel, as well as their three siblings, Fatima, Carolina, and David, became my children in February of 2011, when their grandmother, who had raised them up to that point, needed a loving and healthy home where they could be nurtured. She has remained an important part of their lives and is just as devastated as I regarding their decision.

So, after loving and raising them for over 8 years, since they were 9 and 7 years old, respectively, and within less than 48 hours of making their decision, Leo and Miguel left our home….but never our hearts!

After their leaving, I really wanted to sit down with the Dad of the prodigal son in Luke 15 for a long cup of coffee to share our woes (Look at that family with the obedient and happy teenagers!), our worries (What kind of bad decisions are they going to continue to make?), our wonderings (What should I have done differently? Anything? When?).

So, I did just that, although it was a rather one-sided conversation, with his insights limited to those placed on paper by Luke’s pen. I’ll let you in on some of the musings that have come out of our time together, prodigal Dad and me.

Soon into the conversation, I realized that what I love about the story….is the ending! In fact, I began talking about the end of the story first, when prodigal Dad reminded me that every story with an ending had a beginning…and probably a beginning further back than you realize at the moment.
The day that younger son demanded his inheritance, prodigal Dad assured me, was not the first day that conflict had occurred, nor that a hard heart and pride had been present in the home and conversation. It was simply the day in which Dad determined that it was time to let go…and let God…and let life.

So, the first step in having a prodigal child….is knowing when to let him or her go!

Throughout our conversation, I kept wanting to jump forward to the end. Let’s get to the happy part! To the resolved part! But, prodigal Dad just kept bringing me back to the beginning, which I was coming to realize was really the middle, of the story. He reminded me that the day his son left home, inheritance in hand, he did not know if he would ever see him again! At the beginning, in the middle, we don’t know the end!

Only once in my life have I jumped to the end of a novel because I simply could not wait to find out how all the unresolved issues present in the current chapter would find resolution. That move ruined the book! I finished it out of sheer determination…and determined to never make that impatient move again!

We might not know the end at the beginning, but trying to jump to the end without going through the middle just won’t work!

In the middle, part of Prodigal is waiting.

Step two in having a prodigal child….The Wait… a waiting that you do not know if or when it will ever end. You just wait.

So, how do you wait well?

You wait while preparing for your part in the end. Certainly, it is an end that you do not know if or when it will ever arrive, but you better start getting ready in case it does!

A Prodigal Parent’s heart always wants and waits for the Prodigal to come back, but do we prepare for his or her return?

The amount of pain, rebellion, disrespect, blindness, lack of gratitude, selfishness, and anger present at the moment of a prodigal’s parting does little to prepare the compassionate heart needed at the time of the return.

The Waiting can provide the space to begin to heal, forgive and prepare to love anew.

I’ve done “Prodigal returns”. Leo and Miguel’s younger sister, Carolina, returned to their biological mother in August of 2017. She came back home this past February. She is all the essence of Carolina, my constant shadow, the always-informed member of our family, but with a much softer heart and one who now loves hugs! A true Prodigal return requires repentance on the part of the Prodigal and forgiveness on the part of the Parent. 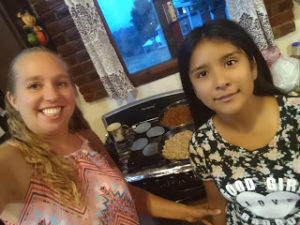 Carolina and I after her return home 🙂

As our conversation continued, I really wanted to know more from Prodigal Dad about the return: his other son, how to guide and parent post-prodigal, how to live out forgiveness on a daily basis….but he had a party to get back to!

Step three in parenting a prodigal…pray for a party! In faith, and in your heart, prepare for a party!

Before prodigal Dad left for the party, he reminded me of one last Truth: He is actually my Father and I am the Prodigal. So, as I love children with the potential of being Prodigals, I am to love them as my Heavenly Father has loved me….full of loving limits and limitless mercy when encountering a repentant heart.

So, with these, Leo and Miguel, we are in step two….The Wait. Please wait with me as we pray for a party! May the Lord soften hearts and open eyes to Truth!