You are here: Home / Missionaries / Hudson Taylor Part One: Preparation for China

Of all the stories I’ve heard of missionaries, not one of them has been boring.  The life of Hudson Taylor is especially 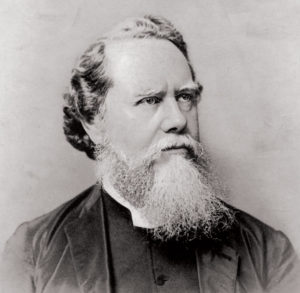 full of tremendous risks and disasters, followed by miraculous examples of God’s faithfulness, of course.  The common thread that has begun to become apparent in all the missionaries I have studied is their faith.  Through all of their differences and circumstances, they each had faith to trust God in even the most absurd of circumstances.

In the life of this particular man, God certainly didn’t hold back when He decided to test His servant’s faithfulness,  Several times, Hudson would be without direction, without money, and without food.  Instead of turning to his friends to ask for readily-given assistance, he trusted God’s timing and instead prayed.  Even when it would be perfectly acceptable and logical to look for help elsewhere, he trusted the prodding of his God to wait for His timing.  I’ve loved listening to story after story of God’s faithfulness even in the life of just one man and how that has impacted an entire nation.  Now I’m sure you’re all anxious to hear these adventures for yourself instead of listening to my ramblings, so I won’t delay you any longer.

Born in Barnsley, England, Hudson grew up in a Christian household and remained an innocent believer until he took his first job at a bank.  There, his friends mocked his faith and eventually drew him away from it entirely.  It wasn’t until he borrowed a gospel tract from his father and read it just for fun in his secret hiding spot that his faith finally became his own.  He emerged from his refuge a new person.  Bible reading and church services became his new favorite hobby, all the while accompanied by his younger sister Amelia, who would remain a constant encouragement and help in his work for years to come.

Hudson knew he was destined for China early on, feeling a calling to that closed-off country after a season of desperate prayer.  From that point on, everything he did was in preparation to better serve God in that specific mission field, though the skills he learned enabled him to help many before he even set foot on a foreign country.  After learning that a medical degree would be the most useful training he could get for serving in a country like China, he spent years training with various doctors and hospitals to learn the skills that would provide so many opportunities later in his life.  All the while, his faith was being stretched by God in many ways, from serious illnesses to poverty to a failed relationship.

Finally, Hudson’s opportunity arrived.  A rebellion had begun in China.  The long-standing empire of the Qing dynasty was being challenged by the Taipings, who had already gained control of much of the interior of China.  This rebellion meant something significant to every missionary and organization seeking to enter into China.  The Qing dynasty that was currently in power had a very negative outlook towards the “white devil” westerners.  Due to a devastating conflict and the introduction of opium to the Chinese via western influence, the Qings hated all outsiders.  They were allowed in a select few “treaty ports” on the coast but were never allowed beyond the walls of those cities.

The Taipings, however, thought that all men were brothers and that, while they wished for the end of opium importation, westerners should be welcomed into their country.  This was excellent news for missions organizations.  It meant that they would soon have an opportunity to send missionaries into the heart of this unreached country.  One such organization, the Chinese Evangelization Society, heard that Hudson was willing to go to China, and immediately recruited him to be their first missionary to inland China.  They sponsored his passage to China and promised to pay him a salary every month while he was there.

A JOURNEY BY SEA

Hudson jumped at the chance.  Finally, he would be able to set foot on the land that had held his heard for so long.  Soon, he was aboard the sailing ship the Dumfries headed for Shanghai.  Four days out from Liverpool, from where he departed, the trip took an unwelcome turn.  A fierce storm rose up and threatened to wreck the ship on the rocks of the Welsh coast.  It took two weeks to repair the damage done by the storm, but after that, the rest of the trip was much more pleasant.  That is, except for a day near the end of the voyage.  The ship had become becalmed.  That meant that there wasn’t enough wind and the ship was being carried along by the current.  This was the worst fear of every crew member of a sailing ship.  You can outrun a storm, maybe even a hurricane, but a becalmed ship goes where the current takes it, and it was taking it right towards a sunken reef.

The crew tried their best to pull the ship away with the longboats, but the current was too strong.  If nothing was done, they would be sunk by nightfall.  Hudson, however, had a plan.  Was his God not strong enough to send a little wind?  He gathered up the three other Christians and began to pray for wind.  After only a few minutes, they had enough wind to carry them along at seven knots, and Hudson had yet one more reason to trust in the amazing power of his great God.  Before long, he had arrived in Shanghai, the beginning of his adventures in China.

I hope you have enjoyed these stories of one man’s faith and the power of answered prayer.  Next week we’ll hear stories of his life in China, from cannon fire to angry mobs.