Even with two posts already describing the life of the missionary Hudson Taylor, I felt there was still more worth telling. 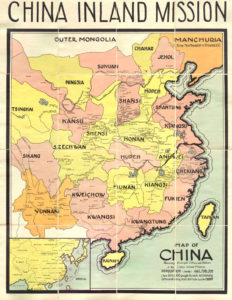 He lived a pretty impactful life.  This post will be a bit different, however.  It’ll be more similar to my regular “teaching” posts than a biography.  After all, the last post ended with Hudson Taylor passing away and being buried next to his family in China.  I don’t think there’s much else I can do in the way of biography.

However, I left a bit out of the story during the time Hudson was preparing to found the China Inland Mission.  The struggles he had just deciding whether or not to start the organization played a key role in his outlook on life and missions.  They played such a great role that I felt they deserved a blog-post-sized explanation.  So, here goes.

Hudson Taylor Didn’t want to start the China Inland Mission.  In fact, he wanted very much not to start the mission.  Even though he knew he and his wife were the best-suited people in all of England to organize an all-out Gospel assault on China, he was terrified.  He was terrified because he knew the risks.  China was a dangerous place.  Even getting to that far-away country could be a dangerous pursuit.  He knew from experience, having almost died twice on his maiden voyage to the country.

Hudson didn’t want to be responsible for the lives of so many missionaries in such a dangerous area.  What if they died?  He couldn’t guarantee their safety and the thought of being accountable for such a daunting task was enough to make any man tremble.

But a profound thought occurred to him, whispered into his mind as he stood ankle-deep in the surf off the coast of the tiny town of Brighton, England.

HOW BAD WOULD THAT BE?

“What was the worst thing that could happen to the missionaries in his care?  What if he took a group of missionaries back to China and they all died?  How bad would that be in the light of eternity?  They would all go straight to heaven.  And if as a result of their work and sacrifice, one Chinese person turned to Christ, wouldn’t that make it worthwhile?” – Excerpted from Hudson Taylor: Deep in the Heart of China by Janet and Geoff Benge

This perspective is a powerful one, though it is often thought of as foolish by the modern Christian (and Christians of every era, for that matter).  Those that cling tightly to the things of this world see this as utter idiocy.  How stupid for someone to see leading twenty-four missionaries to their death as good!  Do they not value their lives?  The answer is both yes and no.  Our lives are only useful in that they give us the opportunity to spread Christ’s love.  There is no greater calling.  There is no greater joy.

CHALLENGES TO THE IDEA

Even Christians combat this philosophy.  After all, you can’t spread the Gospel if you’re dead!  How foolish it is to rush headlong into God’s calling without a second thought to your safety.  I challenge this on multiple levels.

First, we don’t go wandering around everywhere without regard to our safety simply because “God will protect us”.  No, we go where the Holy Spirit calls us to.  I’m not advocating rushing into a minefield saying God’s got your back.  There’s a difference between listening to the Holy Spirit’s prodding and just being plain stupid.  However, I’d rather go into a warzone God has called me to than stay in the American suburbs if He wants me elsewhere.  As I’ve said before on this blog, safety is only an illusion.  You can just as easily die in a car crash in your neighborhood as in a bombing in an anti-Christian nation.  Our job as Christians is to go where the Holy Spirit commands, regardless of the risks.  If He wants us to live, He will protect us.  If He wants us to die, well, nothing is getting in the way of that.  He’s God!  How foolish our feeble attempts to fabricate false safety must look from His perspective.

Secondly, we can spread the Gospel when we’re dead!  It is often the deaths of the great missionaries and martyrs of our history that has proved to be their greatest impact on the world.  A prime example is Jim Elliot, Nate Saint, and the other members of Operation Auca in Ecuador.  They were small members of a small mission in the tiny country of Ecuador before they were killed.  Their deaths served as an inspiration for countless Christians to bravely follow in their footsteps to reach the unreached in our world.  I know that I, for one, have been greatly impacted by their stories.  They are a big part of what inspires me towards my calling of becoming a missionary.

The spread of the Gospel doesn’t stop when we’re dead, but even if it does, how bad is that?  We’re all going to die one day.  In the light of eternity, our lives are but a vapor.  What are twenty or even eighty years compared to all of eternity?  Neither lifespan is even visible when compared to the endless existence that awaits us.

Ultimately, we cannot protect our lives.  We’re too small and fragile.  What better way to spend these brief moments on this earth than in telling whoever will listen about the only thing that truly matters?  If the Holy Spirit calls you somewhere, go there no matter how dangerous.  If the Holy Spirit tells you to stay where you are, stay there no matter how boring.  Our tiny human eyes can’t see the things our God can.  Follow His Word, and live radically.  Don’t lose perspective.  Live in the light of eternity.