Hudson Taylor, the famous missionary to inland China.  Last week we took a peek into his life before arriving in China, 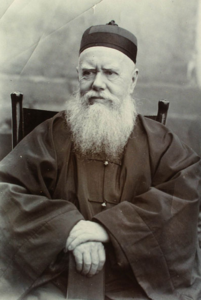 getting to know the various circumstances and trials that led to him eventually landing in Shanghai.  If you haven’t read that post, I’d recommend doing that now, as it provides a lot of useful background for how he got to and prepared for China.

JOURNEYING INTO THE UNKNOWN

Beginning life in China turned out to be quite a hassle.  Out of the three missionaries that he possessed letters of introduction to, only one was still in Shanghai.  One was dead and the other had caught a boat to San Francisco.  Additionally, the letter of credit promised to him by the Chinese Evangelization Society (his sponsor organization) was not at the British Consulate, and in fact, never arrived at all!  Here he was, standing in a foreign country with no money, no instructions, and the only other missionaries in the area holding the opinion that his mission society was a joke.

As it became apparent that the CES had no real plan for Hudson, he began his medical studies once more with the mission society that hosted him there, as well as learning Mandarin, a dialect of Chinese spoken by officials and the learned in every province in the country.  Hudson spent his first year in Shanghai, only leaving for quick trips inland, where foreigners were still not often welcome.  His first long-term effort out of Shanghai was made along with William Burns, a fellow missionary in Shanghai.  An opportunity arose for them to travel 800 miles south along the coast to the port city of Swatow, a settlement known for violence and corruption.  They only ended up staying there for a short time, being forced out by the local government.

Over the next several years, he worked in various areas in and around Shanghai, spending significant time in the city of Ning-po, where he eventually operated the hospital and met his future wife, Maria, marrying her in 1858, four years after arriving in China.  Together, they assisted in running the school and the hospital.  Hudson’s medical training proved to be a great help in caring for the people of China.  His first six years in China were filled with the unexpected, from being chased through a town and being carried by the throat to walking helplessly through the war-torn streets of Shanghai during the conflict between the empire and the rebellion.

Hudsons adventures in China were not to last forever.  In 1860, six years after arriving in such a foreign land, he was forced to leave.  He contracted tuberculosis, and the only hope for survival was the expert care and cooler climates of England.  He and his wife and first child, Grace, along with Wang Lae-djun, a Chinese friend from Ning-po, boarded the Jubilee for their four-month journey to England.  There, he recovered and enjoyed a long-anticipated reunion with his family.  While recovering, he completed his medical training at London Hospital’s new medical college in order to better help the people of China.

Hudson and his family spent the next five years in England.  There, Hudson and Wang worked on translating the New Testament alongside Frederick Gough into the Ning-po dialect from pictographs to traditional romanized words (using symbols to represent individual letters rather than entire words).  In addition to his medical studies and translation work, Hudson also had three new sons to care for!  Still, he wasn’t content to remain in England forever.

Every month over one million Chinese died without ever hearing the name of Jesus.  Missionary numbers in China were declining, and someone had to do something about it.  Hudson tried contacting many missions agencies to share his plan to have two missionaries in each of the twelve provinces (including the Mongolian territory) of China.  None of them seemed to share his enthusiasm.  China, with its extremely foreign culture and regular danger, just wasn’t a fashionable place to send missionaries.  Besides, none of them had the funds for such an audacious idea.

Hudson wasn’t content with their answers.  Those people needed to hear the Gospel.  If no one else would do something about it, he would.  Through many struggles (that I will talk about in a future blog post) Hudson decided to start the China Inland Mission.  He prayed for twenty-four people that would feel called to go to China to begin working in the various provinces.  By 1866, he had sixteen people ready to set sail for Shanghai.  When you add to that the Taylors and six people already serving in China, that’s exactly twenty-four people.  It’s amazing how specifically God can answer prayer!

The journey to China was a rough one, just like Hudson’s first trip.  Despite almost being consumed by the fiercest storm any of them had ever seen, they were ultimately glad for the trip.  Before the trip was even half-over, twenty-three of the crew members had given their lives to Christ.  I guess a ship full of unsaved rough-types was a great place to practice their evangelization skills!

The next many years were spent slowly pushing further inland.  City by city, the group traveled through the interior, telling everyone who would listen the story of their amazing Savior.  The lives of the China Inland Mission workers weren’t easy.  In Hang-Chow, a mob of ten thousand angry Chinese arrived at the door of the big mission house following nasty rumors that the white devils were eating children.  Thankfully, no one died in the attack.  In the years following the attack, the Taylors suffered many losses, though not to the violence of the people.  Three of Hudson’s five children and his wife all died in a period of less than a year due to various illnesses.  The losses devastated Hudson, though he drew comfort from knowing that he would see them again in Heaven.  He was never in control of their lives in the first place, and he trusted God’s plan.

The next several years were spent both in England and China carrying on God’s work.  Eventually, Hudson remarried and had two more children, totaling seven.  The rest of his life, as the decades before, was spent making every effort to make Christ’s name known to the people of China.  In the final years of Hudson’s life, China entered dark times.  The Boxer rebellion brought a new wave of violence towards foreigners, resulting in the deaths of many missionaries.  Still, Hudson knew that all of the friends that had passed on from this earth would be reunited to him in Heaven.  As hard as it was to hear of their deaths, the China Inland Mission pressed on.  They wouldn’t stop until every soul in China had heard the Gospel.

In his later years, Hudson primarily stayed in England and Switzerland due to deteriorating health and mental state.  However, he wanted to return to his home.  He had to see China one last time.  He and his son Howard, now a medical doctor like his father, set off on Huson’s eleventh trip to the country he had spent so many years in.  He visited with as many of the now eight hundred and twenty-five missionaries of the China Inland Mission as he could, encouraging them and revisiting old memories.  It was during this trip, at age seventy-three, that Hudson Taylor left this earth.  He was laid to rest beside his wife and children. His tombstone read, “Hudson Taylor, a man in Christ.”  And that he was.  Through the faith of one man, millions of Chinese came to hear the Good News and surrendered their lives to Christ.

I pray that we all can have as uncompromising a faith as Hudson and as fervent a prayer as this hero of the East.