You are here: Home / Changing the Nation / When the Church is the Problem Part II

We’re so quick to judge those outside the church.  It’s funny, those are the very people Jesus told us not to.  Yes, 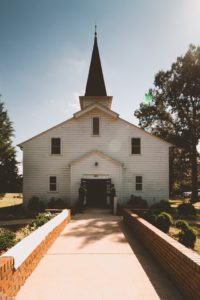 Christians are permitted to judge, but that’s within our walls.  We hold each other to Christ’s standard, not the rest.  Even some of the rules we hold ourselves to are legalistic and, quite honestly, silly.  They’re based on tradition, not truth.

Gambling.  Often called satanic, it’s been judged by the church so much that some churches won’t even play bingo for fear of the demonic dice.  Don’t get me wrong, I don’t believe wasting the money God has trusted us with at a casino is right, but in our quest for absolutes, we rule the grey area sinful.  Don’t you find it strange that the Israelites cast lots to divide the promised land?  They left room for something (or Someone) greater to determine the outcome.  Oh, but that’s just the Old Testament, you say.  Remind me again how the disciples chose a replacement among the twelve after Judas’s death?  Yep, they cast lots.

What about curse words?  Those are definitely sinful, right?  Outside of taking God’s name in vain…check again.  Jesus and Paul both had quite the mouths.  When necessary to provide proper emphasis, they called people foxes (sound like another dog-related name we use?), broods of vipers, fools, and whitewashed tombs.  If those weren’t ancient curse words, what were?  Oh, but doesn’t Colossians 3:8 tell us to keep “unclean speech” out of our mouths?  Absolutely, but I don’t think Paul was referring to an arbitrary arrangement of letters, but the things we speak about.  Calling someone an idiot is much worse than all those words that we bleep out if the former is used as an insult and the latter jokingly.

Then there’s drinking.  Alcoholic stuff, I mean.  I don’t think most churches get mad at you for having coffee in the mornings.  It’s become such a taboo.  For good reason, partially.  Drunkenness is absolutely a sin.  It’s warned about many times in both Old and New Testaments.  It removes our control and, if we’re not in control, who is?  But again, grey areas tend to get labeled sin.  What was Jesus’ first miracle again?  Oh, but that wine wasn’t as high in alcohol content as our modern stuff.  That was “new wine” not fermented stuff.  Yes, because when the guests wondered at why the “good wine” was being brought out last, they were definitely talking about the grape juice, not the strong stuff.  That’s not to mention all the times Jesus and Paul, among others, prescribed “strong drink” or wine for various causes.  You can’t tell me all that was just the light stuff.

I provide all these examples to show a few areas where the church as a whole (not necessarily your church) has focused more on what we shouldn’t do than what we should, regulating on the safe side when there’s any potential for obvious sin.  Yet we still forget the important part.  None of these rules matter if our heart isn’t His!  You can never drink a drop of alcohol, live a good and pure life, and still be far from God.  The Pharisees did similarly.  That got them in Jesus’ good graces, didn’t it?

With all of these dangers in the church, what should we be doing if not regulating how we live?  Again, what did Jesus do?  He went to the sinners.  Jesus was never a religious guy.  He cared a whole lot more about just loving people where they were.  No one had to clean up to talk to him.  Save the handwashing for the Pharisees, he ate with the outcasts.  The change would come from a relationship with Him, not prior to that.  All the rules in the world meant nothing to him unless they pointed to a heart change.

In his sermon, Thurman referenced the movie Hacksaw Ridge, which is a story of a military medic in World War Two.  He wouldn’t wield a gun.  He was there to save people.  He was mocked and beaten by his fellow soldiers, called a coward.  But during the battle of Okinawa, he saved seventy-five men.  He kept praying “Just give me one more, God”.  Just one more.

That’s Thurman’s prayer.  That’s mine too.  If there’s anything we can do to show Christ’s love to just one more person we’ll do it.  It’s a tragedy we let so much get in the way already.  How many people would be with Christ if we didn’t act shocked we saw beer in their fridge?  How many more would I meet in Heaven if we weren’t so adamant about which words are okay and which are “curse words”?

Maybe, just maybe, God cares more about loving how Jesus loved than living how the Pharisees lived.  It’s time to wake up.  There are millions more we could bring to Christ if we stopped expecting them to put on the robes of righteous appearance before joining our religion.  We’re hindering the great commission. I believe the greatest roadblock to bringing the gospel to every corner of our world isn’t persecution from others or the closed ears of the outsiders, but the doctrines and traditions we cling to that have more place in a dogmatic religion than a movement of humans loving their fellow humans.  But I also believe that it doesn’t have to be that way.  Maybe, just maybe, we can learn from our mistakes and God can use a broken, imperfect church to bring His light to this dark world.  After all,  He’s in the business of making broken things beautiful.