You are here: Home / My exeriences / A Warrior’s Heart

In my social studies class, we studied European cultures, and we where assigned a project.  We could choose to either do a report on a Roman god or choose one of many other projects. I chose to build a Roman gladiator’s shield. 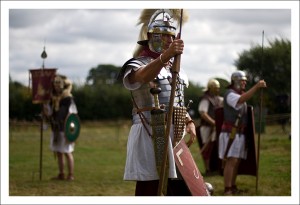 I thought about how the Romans where a strong people, and they conquered many nations.The Romans concurred many nations just as we are called to concur many souls for Christ.  The soldiers were not afraid of their enemies because they new that they possessed the power to conquer their rivals.  Believers also possess the power and authority from our great God to conquer souls for Him.  If God is with us, no one can ever stop us.  God has complete control, so nothing can happen without his knowledge or consent.  We should not be afraid to be rejected by people, when we have a friend in Christ.  He is better than one million soldiers.

We are called to be strong and have courage.  John 16:33 says, ” I have said these things to you, that in me you may have peace.  In the world you will have tribulation.  But take heart, I have overcome the world.”

We should be strong, because our enemy is already concurred.  So now I say to you, what are you afraid of?  Have a warrior’s heart and take courage in the words of our creator, for he has concurred all.