You are here: Home / Changing the Nation / Outside the Gates

American Christianity is a unique thing.  We as a culture are distinctly different from the rest of the world, and thus our 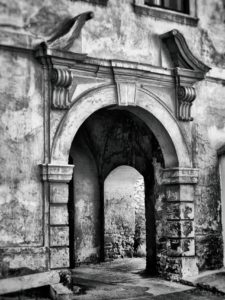 faith is culturally different than the way Christians live in other parts of the world.  Being a first world country isn’t always a good thing, at least for our faith.  You see, in America we have it relatively easy.  We’re not threatened with death or banishment simply for being a Christian.  We don’t have to worry about being safe walking to school because someone might find out we’re a Christian.

Look at our example, and what was done to Him:

“And so Jesus also suffered outside the city gate to make the people holy through his own blood.  Let us, then, go to him outside the camp, bearing the disgrace he bore.” – Hebrews 13:12-13

They wouldn’t even let him suffer inside the city.  No, they took him outside, where the trash goes.  They hung him with a bunch of worthless criminals.  Why do we stay inside the city then?  I want to go outside to where my Jesus is, because if he’s not allowed in here then I’m not going to stay in here either.  That should be our attitude.  I’ve said it time and time again, we weren’t promised an easy life here.  In fact, quite the opposite.  Were promised that we will have trials and we will have trouble in this life (John 16:33).

So what if we don’t get faced with trials?  What if Satan doesn’t attack me?

“How come Satan isn’t attacking me?  Well because he doesn’t have to” (Francis Chan-Why You Should Reject Comfort)

He doesn’t have to.  That should hurt.  Imagine Satan watching us, leaning back watching you live your life, thinking, ” Ah, perfect.  You make my job so easy.”  He doesn’t even have to work to make you stumble, because you’re not up and fighting in the first place!  We shouldn’t be like that.  If we’re not facing opposition we shouldn’t be at peace.  We should start to examine our lives to make sure that we’re living in God’s will, because we’re promised that if we follow Him we will have trouble, so if we don’t we’re not really following Him.

Think about the Church in most of the world.  Often it seems that over here we think that the rest of the world is generally the same as us.  Those poor third world countries are probably few and far between.  That’s a lie.  The U.S. isn’t the norm, we’re the exception.  If you could hear just a few of the millions of stories from the persecuted church, you might see that maybe that notion was wrong.  In fact, I think I’ll share a few from Francis Chan’s travels in India.

One lady became a Christian, and literally everyone in her village showed up at her door one day.  They presented her with the decapitated body of a lizard, because you have to drink the blood of a lizard to convert back to Hinduism.  They told her to drink it, and she just grabbed her Bible and ran.  She told him of that horrifying day when everyone she knew, everything that was familiar to her, came against her.  She and her husband lived in the jungles of India, just trying to survive, and get a little food to eat.  Oh, and I forgot to mention she was pregnant at the time, so she didn’t just have her own life to worry about.

Another man, scars all over his body, told him about a few months into his relationship with Christ, when he was surrounded by guys with bats and pieces of wood.  He said he just looked at God and said, “Ok here I come!”.  He said they just know that that day is going to come.  It’s not a matter of if.  He told him about how he lived through it, but a few of his friends weren’t so lucky, and how they just expect that.

Our pastor in Haiti wasn’t even supposed to be born because his parents were Christians and so the voodoo doctor put a curse on them.  This is the rest of the world.  This is the church.  We’re not promised that it’ll be easy, but we know God will be right there with us in the fire and in the flood.  Don’t live your life seeking to be comfortable.  Go join Jesus outside the city.  It won’t be easy, but if you do, you’ll experience a joy you never thought imaginable.  Go live outside the gates.