You are here: Home / Series / The Lord’s Prayer Part II

Alright, today is the second part in a five- part series on the Lord’s Prayer.  Today we’ll be going over Matthew 6:10. 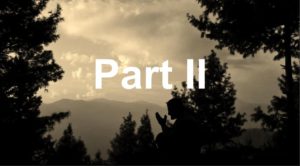 Your will be done,

on earth as it is in heaven.”

At first, this seems like a pretty straightforward concept, but I think that it appears so simple that we neglect to take the time to dig deeper into it an understand it better.  You see, in order for God’s kingdom to come, ours must leave.  We as humans love to be in control, and will do almost anything to gain more.  Thus, it can be incredibly difficult for us to give up the kingdom we have built for ourselves, however big or small it may be.  There is no space in our hearts for two kingdoms, and a kingdom divided against itself cannot stand.

“The kingdom of heaven is like treasure hidden in a field. When a man found it, he hid it again, and then in his joy went and sold all he had and bought that field.” – Matthew 13:44

This phrase reminds me of the parable in Matthew 13 where Jesus tells of a man who found a treasure in a field, and went and sold all that he had to buy that field.  I love how this verse says, “in his joy”.  The man happily sold all of his possessions in expectation of a far greater treasure than all that he already owned.  All of our earthly possessions are like filthy rags compared to the reward of knowing Jesus and spending eternity with Him in Heaven.  Therefore, we should be happy to give all that we own, even our very lives, for the pure joy of the reward we will have in Heaven.

Just as with the phrase,” Your kingdom come,”  the phrase,” Your will be done, on earth as it is in heaven” demands that our will be forfeited for the sake of God’s will.  This can only be done through the realization that God’s will is better than our own, both for us now as well as for us in the future.  Only at that point of complete surrender can we truly be free, knowing that we no longer have to worry about what is to come, but being satisfied with God’s promise that He will never leave us nor forsake us, we can finally live freely and completely for Him and His perfect will.

God’s will is so much better than our own, especially since He is God, the creator of the whole universe and everything in it, and we are but simple created beings.  God has a perspective entirely different than our own since He is not bound by time or physical space.  Why then, do we worry about if He will come through for us, or if He is really good.  He is all knowing, and we are not.

All of this allows us to surrender to His will, not only out of obligation but joyfully, knowing that He will never leave us nor forsake us.  So let’s surrender to Him now, and let this be our prayer:” Your kingdom come, your will be done, on earth as it is in heaven.”