You are here: Home / Series / The Lord’s Prayer Part III 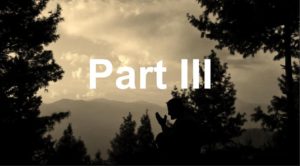 Notice first here that Jesus asked for his daily bread.  He doesn’t ask for his yearly, monthly, or even weekly bread.  No, he asks for his daily bread.  “Just give me enough to last today God.  I trust you to get me through the next one too.”  This reminds me of the Israelites who, when wandering the desert, found themselves in need of a great amount of food.  God responded to this need by giving them manna from Heaven.  Instead of giving them plenty to keep and save, He gave them enough for a single day.  This taught the Israelites to trust Him.  If He had given them a year’s supply, they would probably have forgotten them by the first month or so, seeing that they had enough food to live on and not figuring they would need God anymore when they had everything they needed.

God taught them trust.  So easily we as Americans can forget about trusting God for our daily bread.  Chances are none of us will ever starve, and most of us have probably never even gone to bed hungry.  We have everything we need, and so we tend to forget about God and rely on ourselves rather than on Him.  Let us not forget, though, that He is still the provider of our daily bread, and that we still need Him, even if we think we would be fine on our own.

Another thing I want you to notice in this verse is that Jesus did not pray,” Give us this day our daily feast,” No, he prayed for bread.  Why did he do that?  Wouldn’t a feast be far better?  Yes, but as we have just discussed, having plenty would only lead us to forget about who gave it to us.  We would forget about the host and only think about the feast.  God does not always give us a feast, but He always, always sustains us.

“The Lord is my shepherd, I lack nothing.

Many of us have known these verses from the beginning of Psalm 23 from the time we were little kids, and we probably tend to think of them as those pictures on the felt boards as the sheep resting peacefully in those green, rolling hills as far as the eye can see with little streams meandering though them.  This, however, was not what the author (David) had in mind.  When he was writing this, David was talking about the pastures outside of Jerusalem.  These were not green, rolling hills, this was a desert.  During the night, little tufts of grass would grow out of the ground, and the shepherds would lead there sheep to them so they could get just enough for their next meal, then they would move on.

The sheep had to rely entirely upon their shepherd, even down to every last meal they ate. Similarly, we should should trust God to take care of us, even when we don’t know what we will have to eat tomorrow.  Just like we talked about in part II, we gain freedom by submitting to His will rather than ours, and that comes from trusting that His will is truly better than our own will.