You are here: Home / Changing the Nation / A Tame Lion

As a kid, I loved The Chronicles of Narnia.  I mean I really loved them.  Those books were my favorite books, and I even 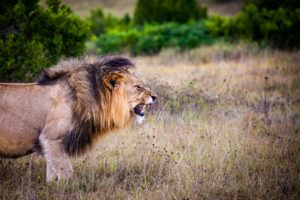 watched the movies several times.  My favorite part of the first book, The Lion, The Witch, and the Wardrobe is this little quote here:

“Aslan is a lion- the Lion, the great Lion.” “Ooh” said Susan. “I’d thought he was a man. Is he-quite safe? I shall feel rather nervous about meeting a lion”…”Safe?” said Mr Beaver …”Who said anything about safe? ‘Course he isn’t safe. But he’s good. He’s the King, I tell you.”  ― C.S. Lewis, The Lion, the Witch and the Wardrobe

Even as a kid, this stuck out to me.  Of course he isn’t a safe lion!  He’s a lion!  But, he is good.  I loved the little hint of nervousness and fear in Susan’s tone as she realizes that the beaver is talking about a real, live lion.

“Oh goodness, they really do mean a real lion!” I can hear her thinking, ” How are we going to survive meeting him?  Surely he’d eat us!”

I absolutely love Mr. Beaver’s offhand response, as if such a notion was absurd and ridiculous.  “Of course he isn’t safe.  But he’s good.”  Why, then, do we expect him to be safe?  We get so surprised when God’s plan seems to bring us into danger or goes against what we normally see as “Christian”.  God doesn’t fit into our stained-glass windows and padded pews.  He prefers to flip tables and make whips when He sees something that needs fixed.  I love how Jim Elliot puts it:

“The will of God is always a bigger thing than we bargain for, but we must believe that whatever it involves, it is good, acceptable and perfect.”― Jim Elliot

Since when is God tame?  God is so much mightier and powerful than we dare imagine, yet we’re surprised when His word alludes to things uncomfortable or unconventional.  Consider this well known verse:

“For the word of God is living and active, sharper than any two-edged sword, piercing to the division of soul and of spirit, of joints and of marrow, and discerning the thoughts and intentions of the heart.” – Hebrews 4:12

That’s no little letter opener.  “Piercing to the division of soul and spirit”, notice the tense there.  The author uses the present tense, meaning that this is actively happening.  It’s not just capable of doing this, no it actually does it.  God, as I have said many times before, is not a safe God.  He’s not tame.  In the same vein, we as His children should follow His footsteps.  Let’s not settle for wielding a letter opener.  Pick up your sword.  Use it.  Be fierce, be dangerous, be… a roaring lion.  Every day of our lives, watch your Father, learn from Him, and follow in His footsteps.

Just because He isn’t tame, though, doesn’t mean He’s bad.  It just means He’s dangerous.  When provoked, though slow to anger, He is a fierce enemy and a mighty judge.  He’s still good, though.  He’s the King, I tell you.  Don’t cower from Him because of the mighty works you’ve seen accomplished at His hand.  He loves you.  Think of it like this:  He’s a mighty warrior, fierce on the battlefield, feared by even the strongest of His enemies.  But He’s also a father.  He has children, and He loves them very, very much.  He may swing a sword fiercely in battle, but at home, His children climb on his arms and lap all day without a care for their safety.  Why?  Because they are His.  They are under His protection.  Their enemies, though strong, wouldn’t last ten seconds against their Papa.

We are those kids.  We’re His children, and He loved us so much that He sacrificed His very life in battle for our protection.  No, He’s not a tame lion.  But He’s a good one.