You are here: Home / Changing the Nation / God’s Authority

I was reading in one of my devotionals, and I came across Matthew 9:9b, which says; “He said to him,’ Follow me!,’  so he got up and followed 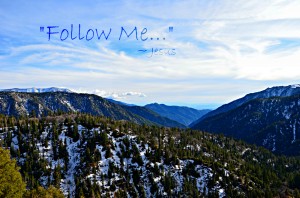 It struck me that Matthew was just sitting in his office working, and heard some guy he had never seen before say,”  Follow me,” and he dropped what he is doing, and followed him for the rest of his life.  He never went back to that office to finish his job, or even to resign his position.  Think of the power that must have been in Jesus’s words if all he had to say was,” Follow me,”  to get twelve people to follow him for the rest of their lives wherever he went, even if he was not physically among them.

All throughout the Bible, you see people whose lives are completely turned around because God called their names.  Noah, building the Ark because God said so; Abraham, prepared to sacrifice his own son because God told him to; Moses, leading Israel out of Egypt because a burning bush talked to him; and the disciples, who dropped their life to follow a stranger for the rest of their lives.  What great authority God has to be able to change lives with only a few words.

Another point I want to make is, God does speak to people, and just because the Bible is already written doesn’t mean God doesn’t still talk to his people.  He still speaks to us, and we would be wise to listen to Him.  John 8:47 says,” He who belongs to God hears what God says.  The reason that you do not hear what God says is that you do not belong to God.”

God still speaks, and You should listen to Him when He does, because there is power and authority in his voice.