You are here: Home / Changing the Nation / Living and Surviving

“He is no fool who gives what he cannot keep to gain that which he cannot lose.” – Jim Elliot

Probably the most famous quote by the late missionary Jim Elliot, it is the polar opposite of what we are taught 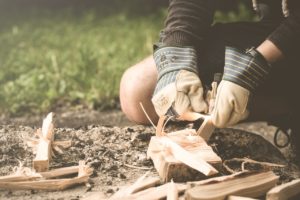 nearly everywhere else but the Bible.  We care a whole lot more about safety and protecting our fragile lives than we do about living fully without fear of what “could” happen.  Wherever we are, let’s be all there.  If we live the “safe” life, never doing anything risky or important, so to avoid the danger in it, are we truly living?  We’re just surviving.

Suppose there were two men.  One lived a life of adventure.  He served in the military, traveled the world, and worked as a freelance writer.  He was his own boss and could do practically whatever he wanted.  He almost died several times on his adventures but loved the experience all the more for it.  He didn’t have a lot of money, but he sure lived a good life.

The second man was more cautious.  He loved music, and had a dream to be a great musician, but thought that was too risky of a career.  Instead, he opted for a desk job in an average, stable business in order to have more security and stability.  He ended up becoming very successful and made quite a lot of money, most of which he put into savings for retirement and his children’s education.  He made ten times what the first man-made.

Now tell me, which one sounds like a better life to you?  Some of you will probably say the second one.  After all, he took fewer risks, lived a safer life, and still ended up better off than the first guy.  But is having more money really a “better” life?  Sure, you’d have more money to spend on more things, but is life really about having the most stuff or the most money?  What value does that have if you never do anything worth living for?  Sure, you may outlive the first person in the example, but I’d bet you when he got to heaven he wouldn’t have any regrets about living a shorter life.  He truly lived it.

John 16:33b says, “In the world, you will have tribulation. But take heart; I have overcome the world.”

We are guaranteed trouble, the Bible says that time and time again.  What good does hiding from it do then?  Furthermore, why should we be afraid of tough times?  What’s the worst that can happen to us?  Death?  That’s just the beginning of a whole new life.  To live is Christ, and to die is gain (Philippians 1:21).  We’re really running out of excuses here.  We don’t need to fear trouble, because Jesus is with us in the struggle, and Heaven is waiting for us in death.  What the can we lose?  We can lose comfort.  We can lose friends.  We can lose things, status, influence, control.  All of these things are arbitrary compared to what we gain from sacrificing them.  They’re just temporary.  Go out and truly live, because anything truly worth living for is worth dying for.