You are here: Home / Books/Based on Book / Screwtape Letters

Screwtape Letters is a book by C.S. Lewis from the perspective of a highly placed demon to a novice tempter on how 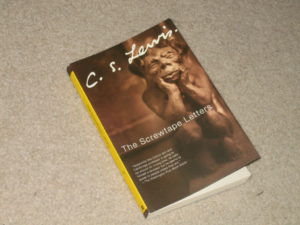 to properly tempt his “patient”.  It is an absolutely phenomenal book and is among my favorites.  In this post, I would like to highlight some of the principles that this book talks about.

This book reveals some tools to defeating the temptation that demons use against us.  Some people may not believe in demons, but the Bible confirms their existence when it talks about the many demons that Jesus and the disciples cast out during their ministries.

Screwtape writes often about keeping their “patients” from realizing things that would make them think about faith and real science.  He writes about this here,”Above all, do not attempt to use science (I mean, the real sciences) as a defense against Christianity. They will positively encourage him to think about realities he can’t touch and see.”

The demons realize they cannot equal their Enemy in anything, and Screwtape points out what God means by wanting us to lose ourselves to be free when he is warning his apprentice Wormwood not to allow this to happen.  He says,” When He [God] talks of their losing their selves, He means only abandoning the clamor of self-will; once they have done that, He really gives them back all their personality, and boasts (I am afraid, sincerely) that when they are wholly His they will be more themselves than ever.”

They are afraid of what happens when someone gives himself to God and denies himself.  They know the danger of  a person who has abandoned his will to follow his Father’s will.

They also try to discourage faith when it is blind by tempting it.  Screwtape warns Wormwood not to allow his patient to allow faith to endure by writing,” Our cause is never more in danger than when a human, no longer desiring, but still intending, to do our Enemy’s will, looks round upon a universe from which every trace of Him seems to have vanished, and asks why he has been forsaken, and still obeys.”

Demons are defeated when they cannot keep their patient from following God even when He seems to have forsaken them.  It is in blind faith that the Lord can best guide someone, only when they are not worried about where they are headed and choose to follow.

Another chief danger to our salvation is moderation in faith.  C.S. Lewis writes through Screwtape that,” A moderated religion is as good for us as no religion at all—and more amusing.”

This means that someone who thinks going to church, tithing a lot of money, and generally acting ‘good’ will save them is just as beneficial to Satan’s cause as a murderer or adulterer.  moderate Christians are, in a way, more beneficial to his cause because they are less prone to repentance because they cannot feel that they are doing anything wrong.  A murderer who relishes killing is still able to feel and therefore can sense good, while someone who kills because he is bored gains no real feeling from that and is also numbed to every sensation.  The pious churchgoer wouldn’t feel a call to return to God because he has no idea he is doing anything wrong and never feels the affects of good and evil.

Are you willing to set aside your self will and no longer be moderate in your faith?