You are here: Home / Changing the Nation / That’s My Voice

“Crucify!”  I heard myself shouting along with the crowd.  We stood before the governor’s palace as he presented 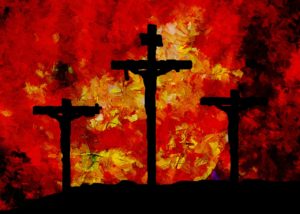 this man, Jesus, to the sea of accusers.  I didn’t know what exactly he had done, but I knew that he had caused a great uproar with the people.  As Pilate washed his hands a shout rose from the crowd, “Crucify!”

Still, he didn’t say a word to stop us.  Standing bloodied and bruised before us, his face showed pity where hatred should have been.  Something inside of me hesitated as I saw his anguish as if he still loved us even as we cursed him.  His silence stung.  I wanted him to shout, to curse us for cursing him.  If he was really who he said he was he wouldn’t let this happen.  I guess not everyone is who we think they are.

Fashioning a crown of thorns, the centurions clothed him in crimson robes and bowed down in mock praise for the alleged King of the Jews.  Offering praises as they spit on him, they scourged him until his body was clothed in more blood than skin.  “Where’s your God to save you now?”

The Romans beat him and led him off.  I followed, wanting to know how this would end.  A crowd formed and flowed through the streets after them, hurling insults like stones.  Passing through the gates we saw a man take Jesus’ cross from his shoulders, bearing the burden for him if only for a moment.  Stumbling, they neared Golgotha, soldiers cursing and spitting at this would-be king with every step.  Jews joined them in the mockery.

The whips of the soldiers lashed behind him as he walked.  Slowing down, he turned to a cluster of women in the crowd, urging them not to weep for him.  The whips caught up with him, and as the leather met his back he parted with the women, crying out in pain as he marched on towards the hill.  Looks like all his great humility ever got him was more suffering.  As the crowds crested the hill, the centurions raised the cross.  He hung there drowning in the mockery from both sides.

Turning to face the thief hung at his side, he muttered a few words.  I couldn’t hear them over the shouting, but the criminal seemed to relax, even in the midst of his anguish.  The other one shouted all the louder.  Hurling abuse, he questioned Jesus, “Are you not the Christ?  Save yourself and us!”  I got the feeling the latter request was more important than the former.

He hung there for hours as we watched, unable to take our eyes off of him for fear of missing some great miracle.  It had grown dark, and a great earthquake had shaken the city.  Surely something more was going to happen.  Finally, he called for something to drink.  Tenderly swallowing the sour wine from the sponge, he suddenly shouted.  “TETELESTAI!”  “It is finished!”

With these words, we all shook.  Bowing His head, He breathed His last breath as we watched in amazement.  It is finished.  The centurion cried out in anguish.  “Surely this man was innocent!”  His words gave voice to what we were all thinking.  What had we done?  Here we had a King.  Someone who could have changed our lives, made us new.  But we were too selfish to see it.

“Crucify Him.” That’s my voice

“Father forgive them.”  That’s His voice.  That’s Your voice.

We hadn’t just made a mistake.  No, this was treason.  All of us, down to the last soul.  We put You there.  It was my hand that hammered in those nails, my fist that bruised Your back, my mouth that cursed Your name.  What had I done?

Still, You hung there.  Surely you could have called a host of angels down with only a single word.  Why didn’t You?  Could it be that it was true?  Could it be that You really did love us?  That You really did come here to die in our place?  You came here, and You finished it once and for all.  He may have bruised Your heel, but with that one simple word, You crushed his head.  You finished it.  Tetelestai.