You are here: Home / Bible Stories / The Parable of the Prodigal Son

There was a man with two sons.  The youngest of them said to his father,”Father, give me my share of inheritance to me.” 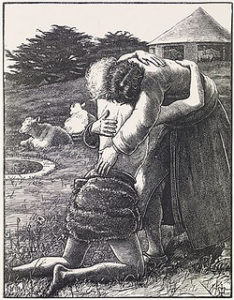 The father did.  A few days later, the younger son gathered his belongings and journeyed to a far off country.  When he was there, he wasted his property in reckless living.  After that happened, a huge famine arose in the country, and he became in need, So he went and hired himself out to a pig farmer.  The young man longed to be fed the pods the pigs were fed, but he was given none.  When he came to his senses, he said to himself,”how many of my father’s hired servants have more than enough to eat, but I am dying here with hunger!  I will go to  my father and become his hired servant.”

The young man went to his father and said to him,”I have sinned against heaven and against you, I am no longer worthy to be called your son.  Make me one of your hired servants.”

While the young man was a long way off, the father ran to him and kissed him.  The son said to him what he had planned to say, but the father said,”Quickly, bring the best robe and put it on him, a ring on his finger, and shoes on his feet!  Bring the fattened calf and kill it, and let us eat and celebrate.”Luke 15:24,”My son was dead, and is alive again he was lost and now is found.”