You are here: Home / Changing the Nation / You Don’t Need to Be Afraid Anymore

When I was a kid, I was scared of the dark.  I would run from the living room back to my bedroom and jump up onto my 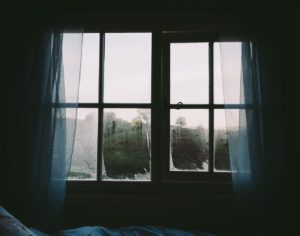 bed as fast as my little legs could carry me so that whatever was out there couldn’t get me.  The darkness, that shadowy place where everything bad and unknown lives, still scares me a bit to this day.  Sure, I’ve learned that no boogie monster is going to jump out and carry me away, but  as I’ve grown older, I’ve become scared of a lot more things than just the dark.

Now, I’m scared of failure.  Scared that I’m not really half the man people seem to think I am.  I’m scared that I one day I’ll look up and realize that I just wasted years of my life chasing something that wasn’t ever there.  I’m scared, scared of wasting time.

I’m scared of a lot of things, but that should not be what defines me.  That right there is the difference between a fearful heart and a trusting heart.  One sees all these evil and dark things in this world and thinks, “How will I ever survive this.  This darkness is so overwhelming it is impenetrable.”  The other looks at the same broken, fallen world and thinks, “God, there is so much darkness here.  Without you, I could never endure this.”

One looks at the world and all he sees is death and destruction with no way to defeat it.  The other looks around and sees that the only way to defeat it is through Christ, our protector.  The greatest truth to conquering the former mindset is the realization that fear is just a lie.  Fear, that nagging doubt in the back of your mind that something bad is going to happen, that you will be powerless to stop it; it’s just a lie.  Satan, the father of lies takes great delight in making us believe that.  He enjoys seeing us doubt that God is really there for us, and he puts great effort into making us believe that God isn’t there.  We must remember, though, that Satan is called the father of lies.  Not a word he spits out is true, unless it is riddled with lies within.  When we hear those nagging doubts pop into our head that God has abandoned us, we must remind ourselves of what Psalm 62:11-12 tells us:

“Once God has spoken;
twice have I heard this:
that power belongs to God,
and that to you, O Lord, belongs steadfast love.”- Psalm 62:11-12

A God that is both powerful and loving erases any need for fear.  If He was only strong, we would know He could do anything, yet we wouldn’t know if those things would be for good or for ill.  If He was only good, we would know that He wants what’s best for us, but not that He is capable of acting on that desire.  I’ve said this before, and I’ll say it again and again until my lungs fail me:  Our God is both mighty, and Loving.  Praise Him for that, because this means we never have to be afraid of what is ahead, even if it appears dark, because we know that God has a plan for us, and He is both willing, and able to protect us.

Now, that doesn’t mean it’s all gonna be sunshine and rainbows.  No, it will be difficult, but He will be with us always

“But now thus says the LORD,
he who created you, O Jacob,
he who formed you, O Israel:
‘Fear not, for I have redeemed you;
I have called you by name, you are mine.
When you pass through the waters, I will be with you;
and through the rivers, they shall not overwhelm you;
when you walk through fire you shall not be burned,
and the flame shall not consume you.
For I am the LORD your God,
the Holy One of Israel, your Savior.” – Isaiah 43:1-3a