You are here: Home / My exeriences / Chasing Our Chickens

Today I have a bit of a different kind of post for you.  This one is a story about something that happened to me recently. 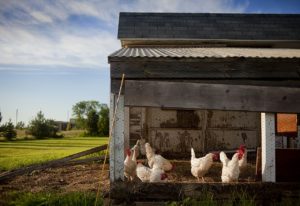 Just a warning, it’s gonna be a bit strange, but we’re all a little strange every once and a while, right?  Stick around until the end though, because I actually have a reason for this insanity.

It all started on a Tuesday afternoon around 6:30. I’ve been house sitting for a friend of mine (let’s call him Mr. Shepherd, because he has sheep). I’m leaving for a couple hours to go to a Boy Scout meeting. Now, I had let the 11 chickens (and one rooster, cocky little thing that one glares) out into the yard from their coop around noon as usual. They would be waiting for me before dark to let them back into their coop.

So, I leave for this meeting, and when I get back, a small storm had blown the coop gate closed. All of the chickens were already inside, except for two or three, plus the rooster glares angrily. The coop is attached to the barn, and is near the sheep’s yard where they can come into the stalls for shelter, food, etc. Now, the rooster and one chicken happened to be in the sheep’s area, and would have to hop through a gap in the fence to get to the coop. But, being chickens, they seemed to forget that they can get back the same way they got there. Soo, I had to chase them around for a while.

The rooster hid in a corner, so I went after the chicken, who ran to the brush alongside the fence that separates the sheep farm from someone’s soy bean field. I follow the chicken, trying to steer it back to its coop. In the brush, I find yet another chicken. I figured this was the fourth chicken I was missing, and that one of the others found its way inside while I was busy. The original chicken eventually runs shrieking back to the barnyard, leaving me to get this other chicken back, who has now gotten behind several stacks of firewood.

About this time, my little feline friend Sabrina comes to help me hunt the mischievous poultry. We get it backed into a corner between the firewood and the fence to the soy bean field, so what does it do? Of course, it goes through the fence into the soy bean field! Gah! By this time, I’m getting more into the brush, which is thorny. Because I just got back from Scouts, I still had my nice uniform on and my briefcase with me. Sooo, I take off the uniform and set the briefcase on some pallets. I then proceed to climb the barbed wire fence, coax the chicken back to the proper side, and usher it into the coop. exhausted bow

Now, for the other chicken and the rooster. Long story short, I spent maybe 20 minutes hopping fences, coaxing the chicken and evil little rooster back to the coop. Neither seemed to realize they could hop through the gate… Buut after a while, I got the two of them into the coop locked away. Now for a head count.

10 chickens, one rooster. That’s not what it was supposed to be. Soo, I then spend another half an hour scouring the barnyard, barn, fields, brush, and anywhere else I thought it might be. Great, the chicken must be dead. Oh I almost forgot, it started raining after I got the first chicken in too, so I had to take of my glasses and was half blind. Yay me! Time to tell Mrs. Shepherd about the missing chicken. Sure she’ll love to hear one of her chickens is dead.

So, I tell her, and she has me check one more time near the coop to see if it finds its way back, and maybe recount inside the coop to see if I missed it. “Yeah right” I thought, “no way I missed that thing! I scoured every inch it could have gone on this property!” Buuuut, I checked anyway. THE FREAKING CHICKEN WAS IN THE COOP BEHIND ANOTHER CHICKEN IN THE NEST BOX!!! That stupid thing had been there the whole entire time, while I searched for it for half an hour in the rain and had to tell my “boss” I failed to keep the chickens safe! really long angry glare at stupid little poultry I really want to fry at the moment

Now, what does that have to do with you?  What on earth can we learn from a fruitless chase through many trials, only to find that, if I had slowed down, I could have solved the problem much sooner? Oh….

In light of this, I would like to ask you to not spend so much time chasing your chickens, and instead slow down.  Some days we get so frustrated and caught up in everything going on around us, that we get overwhelmed by it all, and can’t seem to take a break and breathe for even a moment.  There will be time for that later, when all the chickens are caught.

Notice it doesn’t say anything about what we will do.  We won’t accomplish great things and be exalted among the nations.  God will.  Let us rest in the knowledge that it isn’t up to us, it is up to Him.  Be still.