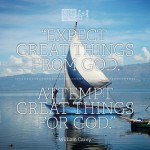 William Carey became a baptist christian because of his friend in Piddington, England.  Ever since Dr. Booth gave a speech about his missionary travels in India, William knew he was called to go to India.  After many travels around England to sell his book Enquiry ( which is the short title people called it by because of […]